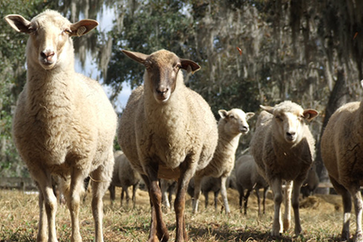 The Florida Cracker is one of the oldest breeds of sheep in North America. It is believed that these sheep developed from sheep that the Spanish Conquistadors first brought to Florida in the 1500s. That makes this specific breed well over 500 years old!


As Spanish explorers and settlements were abandoned over the years, Cracker Sheep were left to roam the wilds of Florida. Today's Cracker Sheep developed largely through natural selection under humid semitropical range conditions in Florida's chaotic climate for centuries. Cracker Sheep were allowed to free-range in pastures, piney woods, and swamps until 1949 when Open Range officially ended. Since the end of the Open Range era, the Cracker Sheep numbers have steadily declined largely brought on by trends in the agriculture industry and the slow creeping destruction of Old Florida by way of urban sprawl and out of control residential development.


Florida Cracker sheep are both active and vigorous without any tendency to be wild. They demonstrate greater resistance to internal parasites than do both wool sheep and most other hair sheep breeds. The ewes can breed back one month after lambing, and ewes can produce two lamb crops per year. Ewes usually bear twins, with some singles, frequent triplets, and occasional quadruplets; lambing rates vary from 150-200%.


For more information about Florida Cracker Sheep please check out the following resources, or contact us below...